Applebee’s is gearing up for what may become the largest ever food sampling event on July 21st! Applebee’s anticipates serving around 2 million plates of Sriracha Shrimp and Churro S’Mores during the #TasteTheChangeDay event at nearly 2,000 restaurants across the country, patrons will also have the option of adding other new appetizers at low sampler prices. Applebee’s is celebrating its 35th year as the leading causal dining chain by showcasing its new and improved menu of yummy craveable bar and grill classics. New appetizers and sandwiches won rave reviews during a “Taste The Change Fest” event in Times Square in May, where thousands of consumers enjoyed sneak previews of the new items and A-list entertainment that was streamed live across the country via Periscope.

The evolution of the Applebee’s menu began with the introduction of All-In Burgers in late 2014, and has continued with the 2015 launch of The Pub Diet™, their lineup of bar-and-grill favorites made a little better for you, 11 new appetizers and several new, over-the-top items – including the stunning Triple Hog Dare Ya™ sandwich, which is stacked high with pulled pork, Black Forest ham and thick-sliced bacon, crispy onions and melted cheddar cheese on a Ciabatta bun.

We recently visited our local Applebee’s to try out some of these new menu items and were very impressed with the quality of food and level of service. Too many other national chains are trying to reinvent themselves with new menus that are not any better than their previous ones and they still have the same subpar customer service. This is definitely not the case with Applebee’s, in our experience there has been a great improvement overall. 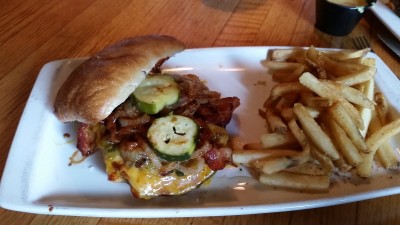 My husband ordered the Triple Hog Dare Ya sandwich which he thought was absolutely wonderful. If you love Pork, this is the sandwich for you, thick sliced bacon, pulled pork and and Black Forest Ham, I am drooling just thinking about it. Sandwiches are served with your choice of endless fries, BBQ fries or sweet potato fries. 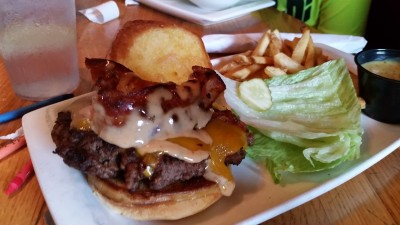 My husband and I have been on a quest to try all of the burgers around Nashville to see who has the best one. Local restaurants offering wide selections of burgers and local craft beers are popping up all over town. We like to have a date night with another couple and go try a burger of the week. So far we have been avoiding the chain restaurants, but this new Triple Bacon Burger at Applebeee’s needs to be on your list if you enjoy a good burger. A thick and juicy patty, grilled just the way you like with bacon inside, bacon on top and BBQ bacon ranch sauce with cheddar cheese, this burger is a masterpeice. 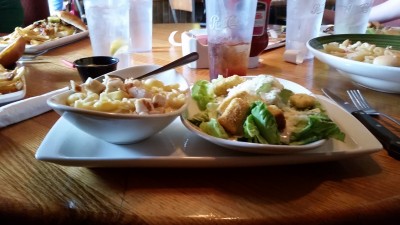 Our kids are getting older and are almost at the age that they will outgrow the kids menu, even now at many restaurants they are tired of the same old Mac & Cheese, Chicken Tenders and Cheeseburgers. Why can’t the kids menu have variety like the adult menu? At Applebee’s it does now. You can still get those go to kid menu items, but your kids can also choose Chicken Grillers, Cheesy Bread Pizza or how about Fettuccine Alfredo with Chicken and a Caesar Salad? That is what Ethan ordered and he loved it, he felt like he was ordering off the real menu. Other sides include Mozzarella Sticks, GoGo squeeZ™ Applesauce, Apple Dippers with Yogurt, Vanilla Yogurt with Strawberries, Baby Carrots with Ranch, White Rice, Steamed Broccoli, Garlic Mashed Potatoes and Fries. Talk about choices!

But the change at Applebee’s extends beyond the menu and into nearly all facets of the restaurant and its operations. In recent years, franchisees across the country have renovated nearly all Applebee’s restaurants nationwide, and the brand has evolved the look-and-feel of its logo, television commercials, Web site, mobile app and more.

The free sampling offer will be available at nearly all Applebee’s locations nationwide on July 21, from 11 a.m. to close.

Valid at participating locations on 7/21/15 only. Dine in only. Minimum one Sampler per party. Additional Samplers may be provided depending on party size. Selection of sampler(s) provided may vary. No substitutions. See participating restaurant for details.