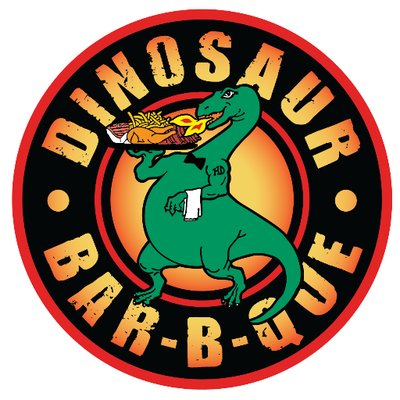 Dinosaur Bar-B-Que began back in 1983 as a mobile concession stand using a 55 gallon drum cut in half. After growing tired of always being on the road, Dinosaur Bar-B-Que settled down in Syracuse NY in 1988. Their bar-b-que is nationally acclaimed and their food and sauces have won honors in publications such as Men’s Health and Eating Well magazines. They were named the country’s Number One BBQ on Good Morning America and have been featured on various Food Network and Travel Channel shows. The menu is firmly rooted in the traditions of Southern bar-b-que, but there are other influences that shape their flavors and give their food its own distinctive character. 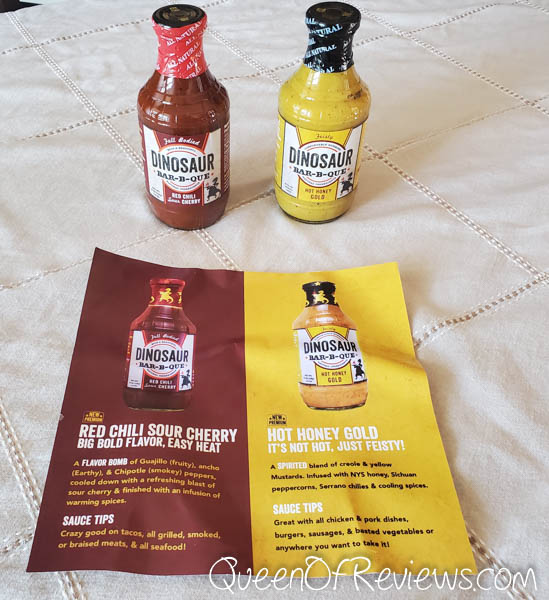 Dinosaur Bar-B-Que recently introduced a couple of new sauces and reached out to us to see if we wanted to give them a try. We are Bar-B-Que lovin’ family so of course, we were excited. The two new flavors are Red Chili Sour Cherry and Hot Honey Gold.  Those of you that know North Carolina Bar-B-Que know it is all about the mustard sauce and the Hot Honey Gold does not disappoint. You get that nice bit of mustard with the Sichuan peppercorns, rounded out by that slight sweetness from the NYS honey. The Red Chili Sour Cherry will have your tastebuds doing backflips. The first thing you get is the warm, smokiness of the Chipotle, Ancho, and Guajillo peppers. Then you immediately get that rush of sour cherry, it truly is a rollercoaster of the senses. 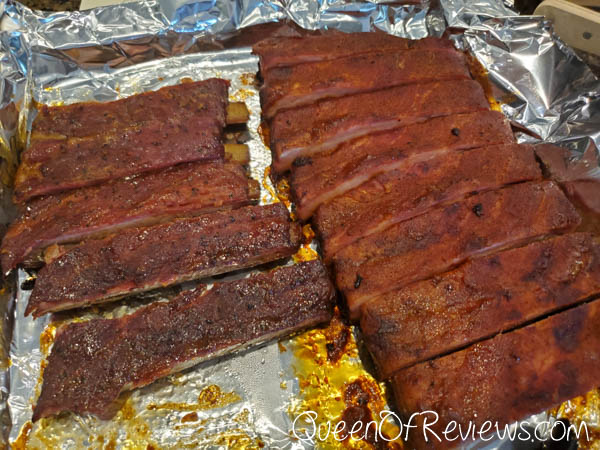 We had everyone over for Father’s Day on Sunday and my husband smoked some baby back and spareribs. Above you can see the ribs with the Hot honey Gold on the left and the Red Chili Sour Cherry on the right. These were a hit with everyone and many had not tried a mustard-based sauce before and were blown away by the flavor. When we first tried the rubs and sauces from Dinosaur Bar-B-Que back in 2019 we absolutely loved them. My husband’s all-time favorite Bar-B-Que sauce since that time has been the Sensuous Slathering Sauce and these new varieties from Dinosaur Bar-B-Que just add more flavor and variation to our weekend Bar-B-Que arsenal. If you have not tried the products from Dinosaur Bar-B-Que, you are missing out terribly. Their products are available directly from dinosaurbarbque.com as well as on Amazon. Check them out today and be sure to show them some love on facebook, twitter, Instagram, and YouTube