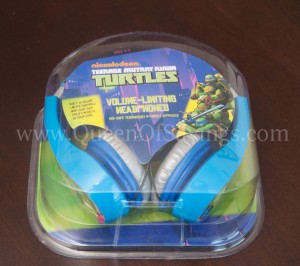 My 8 year old son is just getting old enough that he is getting interested in music and he loves to play games on our iPad. He cannot always use the built in speakers because it bothers other people around him so we decided to let him try these headphones. These are not your regular every day headphones, they are made for children and limit the volume to prevent damaging their ears. My other 2 children that are older now grew up with mp3 players an iPods and I remember being in the care and I could hear their music perfectly clear from their ear buds so I knew it was way too loud, although they did not think it was. 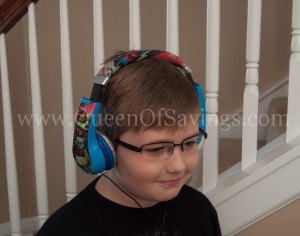 The pair we received are the Teenage Mutant Ninja Turtle design and they look really cool. The ear cups were very comfortable to wear, per my son and they also had enough cushion to block out the majority of outside noise. The Teenage Mutant Ninja Turtles Kid-Safe Headphones are compatible with all portable devices that feature a 3.5mm stereo jack output, including iPod, iPhone, iPad, Android smartphones and tablets, and portable gaming devices such as the PS Vita and Nintendo DS series. These headphones are also compatible with laptops, PCs, CD players, and home audio systems. The only complaint my son has was that some apps were very hard to hear regardless of turning the volume all the way up on the iPad and I did verify this.  For the most part the headphones worked as designed and he was able to play his games, watch videos and listen to music without me having to worry about his ears getting damaged.

These headphones are available in a few different designs from Amazon, including Hello Kitty, My Little Pony, Batman, Barbie and the TMNT I received plus more. These would make an excellent gift idea for your child or just buy them and save their ears and you from having to hear “Huh” from them when they are teenagers. You can enter for your chance to win a pair of Hello Kitty, My Little Pony or TMNT headphones in my giveaway here starting 2/1 and be sure to check out sakar.com and show them some love on facebook, twitter and Pinterest.